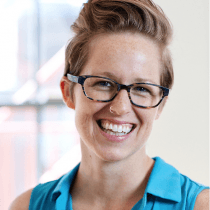 Sydney Schaef, Ed.D., M.B.A, is Managing Director at reDesign and a noted leader in the field, closely partnering with leaders at the school, district, and state level on initiatives involving school and system design, capacity-building, and knowledge codification. She has authored numerous publications on reimagining teaching and learning, including, “It’s Time to Redesign K-12 Academic Standards,” Five Big Ideas for Learner-Centered Competency Framework Design,” “What is the Difference between Competencies and Standards?” and Meeting Students Where They Are.

Sydney's interests lie at the intersection of organizational development, change management, and school redesign initiatives that emphasize competency-based, learner-centered models. Prior to joining reDesign, Sydney served as Director of Learning Strategies in the Office of New School Models, School District of Philadelphia, where she supported new school startups, and led the development and knowledge-building work of a competency framework, Learning What Matters, for several recently launched open-admission high schools in Philadelphia.

Sydney’s work in education has been both domestic and international, with over fifteen years of experience in educational program design, nonprofit leadership, and education management. Originally from southern California, Sydney began her work in education as a science teacher in South Los Angeles as a Teach For America corps member. In 2006, Sydney founded a 501c3 non-profit organization and as its Executive Director, led its international development work with a focus on secondary education delivery, youth development, and social entrepreneurship. Under her leadership, the nonprofit co-founded and operated the first free private boarding school for orphaned and vulnerable teens in the rural region of Mkuranga, Tanzania, that featured youth-led entrepreneurial programs in permaculture, poultry farming, solar energy, music and the arts.

Sydney was awarded the Skoll Scholarship for Entrepreneurship in 2011 in recognition of her leadership and innovation in education design, development, and program delivery in East Africa. She continues to be involved in the Skoll Scholar Network, a network of over sixty social entrepreneurs and University of Oxford alumni working across the globe to drive solutions to social and environmental challenges.