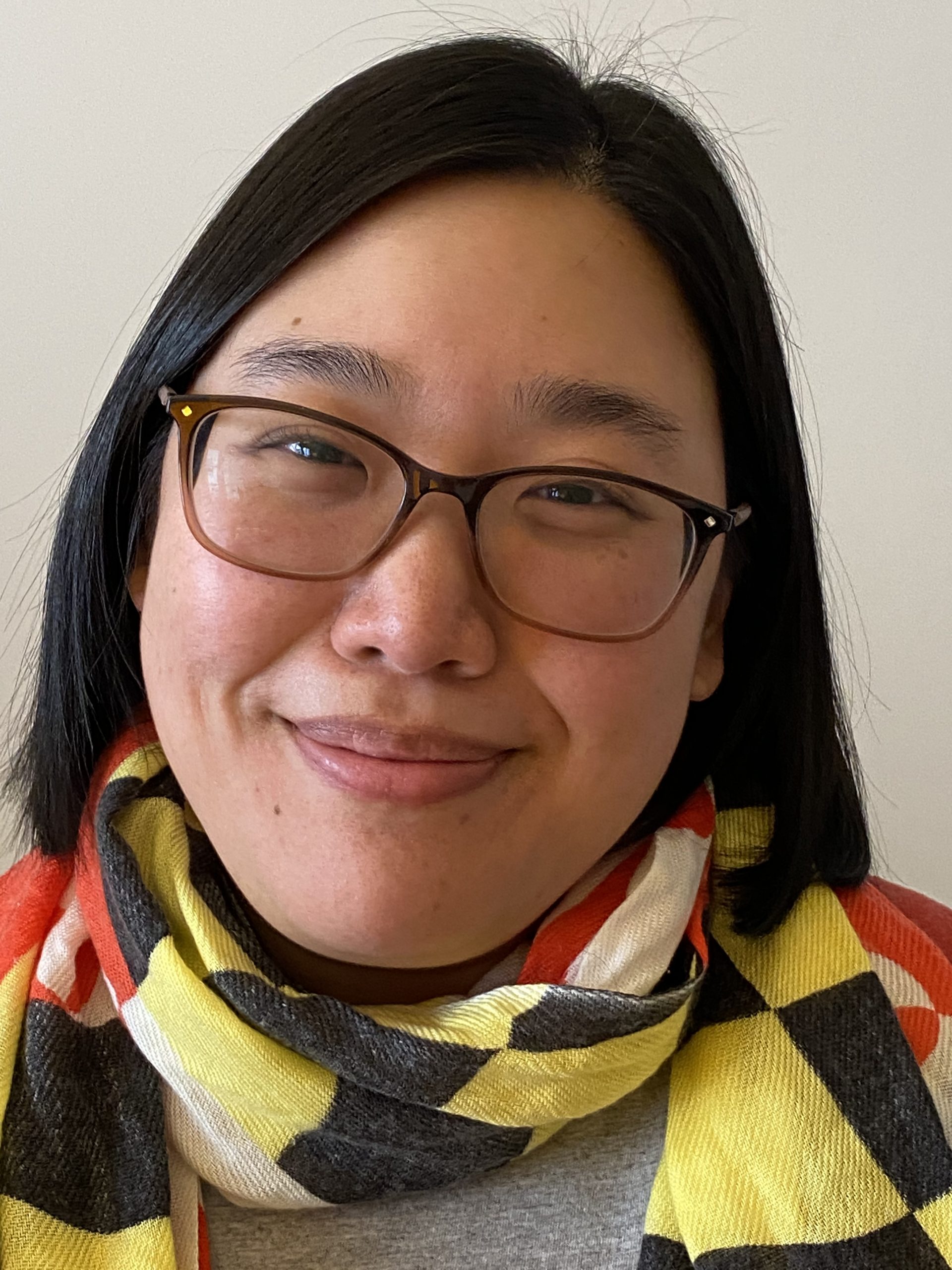 “I’m not interested in the type of teaching that leads to one answer.”

There are a lot of reasons why one chooses to be a teacher. When I asked Angela Wang, a 14-year veteran teacher from Maryland, about hers, she responded with a grin. “Because I was too scared to take the LSATs!”, she chuckled. When the laughter dies down, she tells me more seriously that she credits the educators from her own school experience with inspiring her to become a teacher. One of her fondest memories in the classroom was with her 8th grade U.S. History teacher:

Since then, Angela has worked hard to become the kind of deeply involved educator that once inspired her so many years ago. At her school in Maryland, she does everything – from teaching classes, to supporting students with disabilities, to sponsoring things like the Student Government Association and leading the Equity Team for staff learning. She especially loves the subject she teaches — Social Studies. To her, it’s exciting because there’s never a single right answer, and that opens up opportunities to challenge old ideas, and explore new ones. She tells me,

“History has already happened, but as we live, grow and evolve and time goes on, we find more documents and go through them with even more resources. We change our minds about how we view history and the government… There are new public policies and new laws. I tell students, ‘your opinion is your opinion, but you have to justify it.’ I’m not interested in the type of teaching that leads to one answer.”

In Angela’s experience, however, the way that most educators teach history doesn’t support that kind of dynamic, inquiry-based approach that she loves. In fact, she tells me, she has come to realize that her biggest struggle in the classroom is not with her students, but her fellow educators. Inspiring colleagues to critically evaluate their subject matter is a daunting task, especially with rigid academic standards looming over them. Angela believes that when a teacher has the space to explore and challenge their curriculum, they are able to inspire their students and create a greater sense of community. She describes her own approach, saying

“I do not want to keep teaching to the same standardized test where the language is biased… students take that same test year after year and flounder. Our students deserve more. So whenever I can, I try to show real resources, clips and materials. I try to ask students how they are going to follow up with this new information and what their thoughts are. I always open up the classroom floor if there has been a big event, like a grand jury decision with no indictment and ask students to tell me their thoughts and explain to me what they believe happened, why it happened and what is the process of law. When you build that community with students they open up and there is a huge conversation. I encourage students to look at current events with a critical eye and to think about what could be missing from the story.”

When the pandemic came around, Angela’s desire to break free from the rigidity of standards only grew. She recalled thinking, “I’m ready to go back to something new. I cannot go back to the status quo.” It was in that state of quiet resolve that she first heard about reDesign’s K-12 Content Map Design Studio. She said,

“I think reDesign was fate. The invite came in an email. I am not even sure who sent the email. It [came from Education Week’s mailing list]. And I said ‘Let me see what this is!’ So I attended an information session to learn more… “

At the information session, she was introduced to something vastly different from any other professional development opportunity she’d ever heard of — a week-long creative endeavor to redefine the most important, relevant, and preparatory disciplinary content for young people in K-12 education. It sounded like exactly what she needed — a chance to take action, and to do so alongside a community of educators committed to the same goal. She applied, and was enthusiastically accepted.

The Design Studio hosted ten different teams, each carefully composed to include participants with a variety of backgrounds, identities, experiences, and professional environments. Angela joined the Human History team that was tasked with creating a preliminary K-12 content map that defined essential cross-disciplinary concepts and topics, with a thought out rationale for their inclusion against the stated goals of creating an inclusive, multicultural, anti-racist content map. If that sounds crazy and complicated — it’s because it was. But the chance to dive into a task like this, and explore uncharted territory, was compelling. And so it began!

Over the course of five days, Angela and the Human History team unpacked what the essence of a “History” education is, and more importantly, what it should be. One of their first considerations was the name of their discipline, and its implications — they eventually renamed “Human History” to “Human Stories”. Angela described this process, saying

“We wanted the content map and curriculum area to be about the students. With identity being at the core of the content map, we focused on the human stories of different identities, with the idea that identity can and will change [emphasis added].”

Although seemingly surface-level, that shift in focus actually made an enormous difference in the way their team conceptualized the discipline, as well as its essential concepts and topics. Thinking about the human stories that make up “history” encouraged them to analyze specific events, and consider the stories that people with various identities would tell about it — in other words, they began by investigating how history is created. Angela said,

“We started off with an event. With that event we thought about how academics would think about it, how communities would think about the event, and how people who were actually a part of it would examine that same event. We thought about the event like an atom floating around and how those individual examinations will impact how those involved see history and how we as a collective whole see history.”

Placing value on every person’s story and perspective guided the team towards a new content map that rejected the “one right answer” approach to Human Stories, and brought them closer to what Angela loves about the discipline. The focus on storytelling also helped them consider the skills that students might need to develop as they engage with historical content — skills like investigative inquiry, analyzing historical perspectives, and thinking critically.

What emerged, Angela told me with a laugh, was a 40-page document outlining her team’s idea of an inclusive, anti-racist, multicultural content map for Human Stories. While that might seem like an avalanche of information, in the context of the task at hand it actually seemed pretty appropriate! Thinking back to the start of the Design Studio, Angela recalled the enormity of the task in general, saying

“On opening day, someone said to our content group, ‘Oh, you all have such a big task. Make sure you cover all the stories and history!’ And for a second I was like… what did I get myself into? Oh man…”

Ultimately though, Angela tells me she was proud of what her team created. They took care to see the nuance in every event, which was especially necessary for a discipline like History (or Human Stories). Most importantly, they grappled with the difficult issues too — equity, white supremacy culture, and the history of discrimination and marginalization. They were intentional about discussing and addressing these when building their content map, and a shared set of values made that collaborative work gratifying and meaningful.

Looking back, Angela found the Design Studio a deeply transformative and meaningful experience. Although she is not new to considering History as an exploratory, inquiry-based subject, the opportunity to completely reimagine the discipline from the ground up while collaborating with a team of diverse and dedicated individuals really pushed her thinking. What was most salient, however, was the feeling of connectedness that organically emerged over the course of the event. She said,

“There are very few opportunities where you actually get to talk to educators or people of expertise from all over the country or all over the world just to gain knowledge. When I did the concept mapping I learned so much just from our group. We had huge ideas and we created a ginormous content map. Those moments are what drive me!!”

Moving forward, Angela hopes to continue pushing for educators to go beyond standards in order to explore their content, and inspire their students. For her, the Design Studio just got the conversation started — and there is so much more to be said.