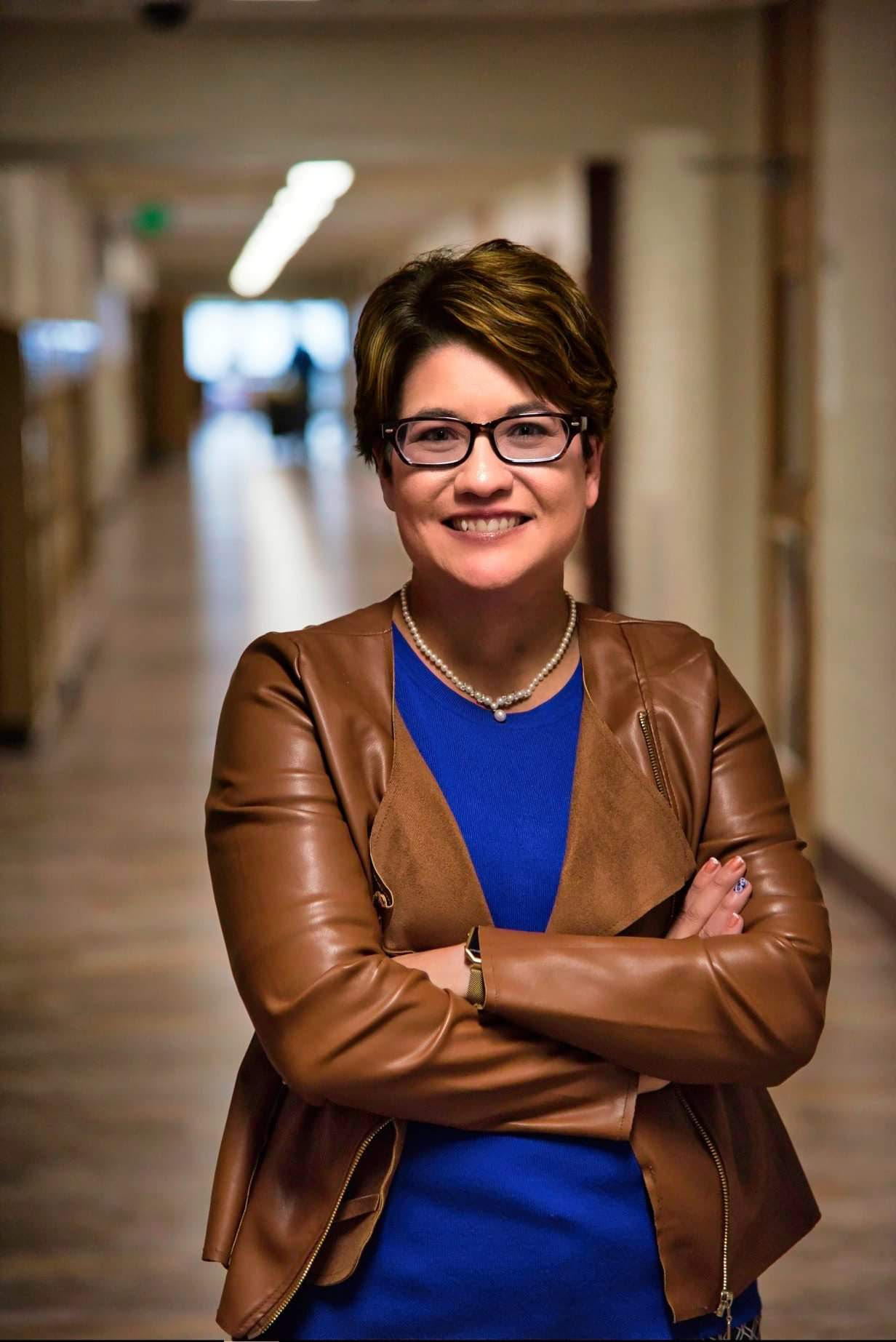 “It was rich, exciting, and challenging. We had some hard conversations, but everybody was raw and real so we could explore what everybody was thinking.

A scientific method of inquiry has long helped humans make sense of the world through a careful process of observation and logic. But when high school science teacher Linda Rost entered her school assembly in the fall of 2019 to uproarious applause, it seemed as though the world had temporarily stopped making sense.

While Linda knew that she had been nominated for 2020 Montana Teacher of the Year, she had no idea that she had actually won until she was surprised by students, faculty, and State Superintendent Elsie Arntzen. When she finally understood what was going on, her confusion gave way to surprise and elation.

The experience turned out to be good practice, however, because shortly after, the world seemed to stop making sense once again — when it shut down with COVID-19. This time, Linda’s fellow educators across the state looked to her for answers that she didn’t have. “Right away, I felt the pressure to be that voice for teachers in Montana in regards to online teaching,” Linda says. “Everybody expected me to know what I was doing, and I didn’t know any more than anyone else!”

So, like generations of curious people before her, Linda tried to make sense of the changing world around her — using an inquiry process.

Step One: Make an Observation

After meeting other State Teachers of the Year, Linda observed a pattern in their experiences — as educators, they were turning out to be vital to the welfare of children, their families, their communities, and the world as a whole. “We are classroom teachers and that’s super valuable, and the world wants to know what we think from the trenches.”

Linda originally wanted to go into Ecology like her father, who would lead his family on midnight scorpion and snake hunts as part of his field research. While taking upper level science classes, Linda saw that her friends were struggling, so she began tutoring them. As she was up at the chalkboard, her friends found that they understood the concepts more clearly than with their professors. Meanwhile, Linda would spend hours a day in the lab, bored and lonely. So she thought: I prefer teaching! Linda was granted an emergency teaching license while she worked on her certification, ultimately obtaining it after her second year of teaching.

“With teaching, I felt like I was learning along with the kids,” Linda says. “And they taught me so much. I was humbled to the point where you’re like, ‘I messed up and that’s okay, I’ll try this other thing.’ But that feeling of doing science with kids— sitting next to them doing what I love—is incredible”.

Linda knows that the most effective way to study science and engineering is to approach it as scientists and engineers do. But that kind of inquiry-based learning wasn’t easily taught at the beginning of the pandemic. So Linda had to reassess—in real-time—what science instruction meant in a remote learning scenario.

“I went through a week where I was stuck, and I was mad at the world,” Linda confides. “So I reached out to my students and asked what they wanted to learn.”

Her students researched COVID-based projects, where one student investigated how the lockdown affected mental health, while another explored how rodeo events could be designed to employ safe, social distancing practices. Linda became more of a facilitator than a traditional teacher. One of her requirements, however, was that students shared their findings with the community, and—being a rural area—her students encountered some pushback to science.

“One of my students was investigating coronavirus in cattle, since a lot of ranches were claiming that they didn’t have to worry because they vaccinated their livestock,” Linda says. “So she shared the information—that this was not the same thing— and she had to deal with the reaction. It was really challenging, but my student stepped up to that: helping her community mitigate the spread of COVID.”

The pandemic shifted how Linda looked at learning and classroom time, where—unencumbered by traditional classroom management tasks—she was free to focus on student growth to yield more meaningful learning experiences.

Linda has been implementing the Indian Education for All (IEFA) Standards — which teach students about the distinct and unique heritage of American Indians — into her curriculum for more than six years. One project focused on Flathead Lake in Northwest Montana, where half of the lake is owned by the Flathead Indian reservation, and the other is owned by the state. An invasive species of shrimp had taken over the lake, wiping out salmon and bald eagle populations, and the tribes managed the situation differently than the state managed it.

“We began having roundtable discussions where the kids represented different sides of the issue,” Linda shares. “One was a tribal scientist, one a tribal council member, one a state scientist, and one a provocateur, and they discussed the problem and worked collaboratively: which doesn’t actually happen in real life!”

A Navajo student came up to Linda after the first day of her Flathead Lake unit and asked if she could share insights into her Navajo culture. The next day, the student brought in a duffel bag full of cultural artifacts, as well as gifts for each student. This special moment inspired Linda to ask the rest of her students what they would put in their duffel bags? That question prompted many more — about the concept of “culture” itself, how different cultures are represented in the world, and what it means to honor and express one’s culture without marginalizing others’.

Linda noted that these questions were deeply relevant to the traditional curriculum, where pre-existing power structures have led to particular voices being heard at the expense of others. They’ve led her to be more intentional about creating a learning environment grounded in mutual respect, where all voices are welcomed and heard. This, in turn, has led to a noticeable shift in how her students engaged with each other. It’s also caused Linda to wonder how she might sustain that shift. In other words – what other aspects of her curriculum could be reimagined as inclusive, multicultural, and antiracist?

That curiosity, stemming from a deeper commitment to a more equitable curriculum, led her to reDesign’s Reimagining the K-12 Content Map Design Studio, where she was welcomed into a diverse community of educators and curriculum experts who shared her curiosity and commitment.

The Design Studio had a simple, if ambitious, purpose: to create an inclusive, multicultural, and antiracist map of K-12 content through which learners could purposefully build disciplinary knowledge and develop transferable skills. The event organized 100 content experts into ten disciplinary teams, one of which included Linda — the Life Sciences team.

“I was reading Spark by qualitative researcher Patricia Leavy,” Linda says. “It’s a fiction novel about a conference in Iceland where random people are brought together into diverse groups to solve problems. Each had their different perspectives on the issues, and the main character had to write up the results. So I became part of the K-12 Content Map Design Studio and it was the same thing! I was in the same situation, where all of these different perspectives, experiences, and contexts merged into the ultimate collaboration!”

In her Life Sciences team, participants were tasked with selecting key concepts that were crucial to exploring and understanding the Life Sciences, but could also connect to other discipline areas. One of the concepts they identified was Survive and Thrive; another was Impact. Linda and her fellow participants were tasked with exploring what the concept of Survive and Thrive would look like in a History classroom, for instance, or in English, or math…In the Life Sciences, they focused on the concept of evolution, and looked at how this and other overarching concepts could interact with other curriculum areas to build learners’ cross-disciplinary knowledge. It convinced Linda that the concepts were far more powerful when woven into a holistic learning experience across all subjects.

Linda has been on numerous national and state committees, but the K-12 Content Map Design Studio week went well beyond what she had experienced before: pushing back on traditional schooling structures to uncover the true possibilities of an inclusive curriculum.

“It was rich, exciting, and challenging,” Linda says of the experience. “We had some hard conversations, but everybody was raw and real so we could explore what everybody was thinking. We got to be in the seat of a learner and create things in a way that was open ended, yet we knew what we had to get done and that everybody’s endpoint could look different: which is how all learning should be!”

Back home in Montana, Linda is using her experience at reDesign’s K-12 Content Map Design Studio to help affect meaningful progress in her state.

“Recently, there has been a lot of talk about critical race theory,” she says. “So I provided our State Superintendent with information on what critical race theory actually is, the papers I had written on it, and what it looks like in the classroom. I shared my Indian Education for All Standards project…which, at its core, is critical race theory, and something that we Montana educators are super proud of.”

One of the methods the Design Studio used to support an inquiry-based approach was to offer each team a set of tools that they could use to grapple with anti-racism and multiculturalism throughout their design process. As participants sifted through the concepts and topics, they had to think through how each could be aligned to an anti-racist and multicultural approach to learning — which Linda found to be one of the most thought-provoking and enduring aspects of the experience.

“It was incredibly eye opening,” she says. “Everybody had different perspectives and different concepts, and we put all of those through an anti-racist and multicultural lens. It was amazing. I’m in the field of curriculum and instruction, but the experience shifted me into thinking about the power behind that curriculum and what’s missing and who is the voice telling it and how that has driven society and our culture. And that’s how we can move forward!”