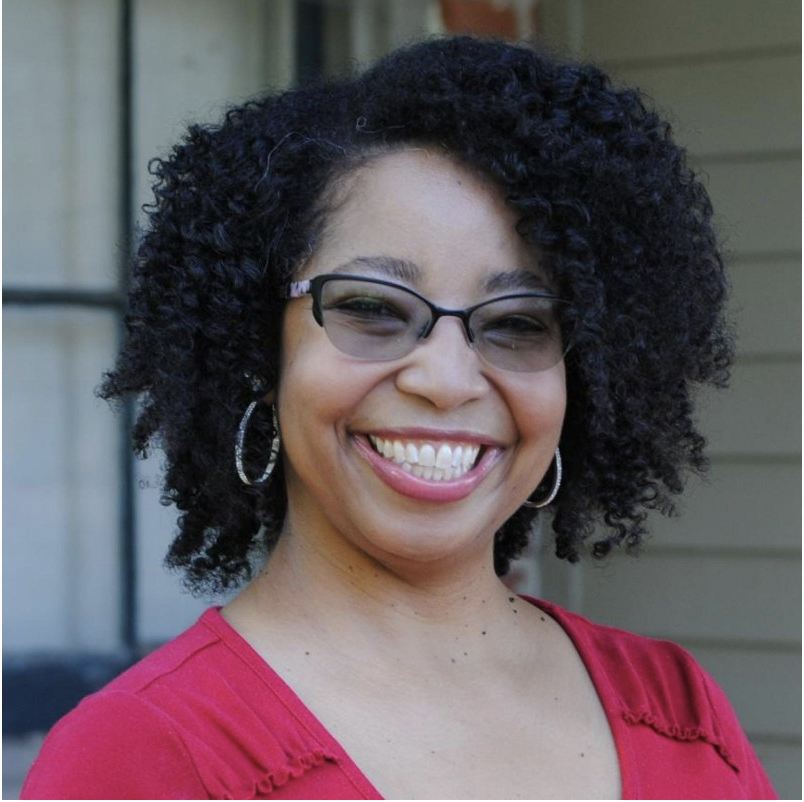 “Content is a vehicle you can use to get to know yourself.”

When she talks about her doctoral field, Roshaunda Cade’s face lights up the screen.

“I love 19th century American literature. It doesn’t really matter who the authors are. I’ll say ‘oh, yes, give me more!’ But I’m particularly interested in work by and about Black people.” Her smile shifts to a look of incredulity when she adds, “And I had a graduate school professor tell me that Black people didn’t write anything until the 20th century! I was, like, ‘Dude, where have you been living?’”

Roshaunda figured if a literature professor wasn’t aware of the work, plenty of other people weren’t either. This pains her because she feels strongly that “you can find your stories there, or something that resonates with you… and the issues are not different from the issues we all are currently facing.” She knows that revealing these Black authors and characters opens up this world to students who otherwise might not engage with it, in addition to expanding or disrupting more traditional understandings of the period [1].

So Roshaunda weaves the themes she finds in 19th century literature into other parts of her professional work, primarily as a writing instructor at the college and graduate level. She has also taught high school English and managed several university writing centers over the years.  She notes that she had “the privilege of a fantastic education… [and] I’m grateful for that. But it also strikes me how unfair it is that because my parents could afford to live someplace with a higher tax rate, I have a better education than other people.” Even with that privilege, she points out, “I’ve definitely had doors slammed in my face because my name is Roshaunda, because I look the way that I look.”

She thinks a lot about Black students who don’t have her privileges. “A mentor once told me… I lacked the mental rigor to pursue my doctorate. If I have people telling me ‘no,’ I’ve lived such a life that I understand I can still tell myself ‘yes.’ But a lot of people don’t know they can still tell themselves ‘yes.’ So that really fueled my passion to help support students and help dismantle the systems that keep people out.” That work, in turn, led her to participate in reDesign’s K-12 Content Map Design Studio— a week-long virtual collaboration between multicultural content experts with the goal of redefining the most important, relevant, and preparatory disciplinary content for young people in K-12 education.

reDesign’s impetus for holding a design studio to “Reimagine the K-12 Content Map” was simple: it has become increasingly clear that our academic standards are simply not working. They don’t prioritize multiculturalism or anti-racist perspectives. They don’t align with the learning sciences. They don’t focus on the key concepts that learners need to understand in order to thrive in a changing world. And, they haven’t resulted in the improvements to academic outcomes that we hoped for. The disruption of the pandemic and our country’s long overdue racial reckoning, have highlighted the extent to which the need for rethinking is urgent.

And it has also become clear that if we want a radical reimagining of K-12 content, as reDesign enthusiastically does, we need to create a bigger design table with particular attention to welcoming experts in the content areas who would bring, as the open call for the Design Studio noted, “a lived commitment to antiracism, and a vision for equitable, inclusive education.”  Roshaunda brought all this and more, not only through her advocacy for a more authentic, multicultural understanding of 19th c literature, but also through insights from her experience as an executive/life coach and creator of LELA House – a virtual education enrichment community.

Roshaunda teaches content. She instructs in writing skills. But it’s clear that Roshaunda is fundamentally a coach, and not just when she puts on her life/executive coaching hat. “Education,” she feels, “is many, many things,” but too many schools focus primarily on one thing: transferring knowledge in a standardized way. “And so I think, coaching–helping people become who they want to be– is helping break education out of being just one thing. Coaching is education, it’s education in you. Learning who you are, and where your strengths lie, who you want to be and where you want to go with that.”

But what’s coaching got to do with content? Roshaunda sees a reciprocal, upwardly spiraling relationship between them. First, understanding oneself in an assets-based way supports a more productive and empowering engagement with content: “Everybody is not going to love literature like I do, and that’s perfectly fine. But if they understand who they are, and what their strengths are, they can approach literature from that strength perspective. They can get from the literature what they need to and not feel like it’s something that’s being foisted upon them, but something that is offered to them to enhance their ongoing education.”

At the same time, she’s also a firm believer that “content is a vehicle you can use to get to know yourself”. She cites two kinds of connectedness that learners can experience through content. The first involves literature that fosters belonging and identification in ways that can empower readers. “If you can get the connection with people who look like you, speak the same language as you, or who identify the same as you, you know that you’re not out here on an island by yourself. And if they were able to do something, well, then maybe I’m able to do something too…” The second is the empathy connection between readers and writers from different backgrounds or identities. “Connecting to the literature, you can connect with other people around you, because you start hearing their stories differently and understanding them in new ways. And you connect with the issues that are important to them.” Because, as Roshaunda points out, understanding yourself also involves understanding others and the world around you.

Roshaunda’s vision of content as a vehicle for students to better understand themselves and the world aligns with reDesign’s belief that learning should be truly focused on the learner, rather than the curriculum or the standards. The goal of the Design Studio—to re-imagine disciplinary content through a lens of relevance and inclusivity—supports both approaches by providing a robust but streamlined frame on which learners can hang new knowledge to build their understanding of themselves in the world. (reDesign likens key concepts to “coat hangers;” David Perkins proposes a similar approach to disciplinary concepts based on “big understandings” – ideas that are big in insight, action, ethics, and opportunity, leading to learning that is “lifeworthy” and “lifeready” [2].) At the same time, organizing K-12 content around essential cross-cutting concepts (instead of mile-wide, inch-deep coverage standards) also opens up the time and scope for learners to build competency and disciplinary expertise as part of their broader development as learners.

To fulfill this student-centered vision, diverse learners need to have access to literature that reflects their personal identities and communities. And majority learners need to engage with a full range of multicultural, multi-racial, multi-identity writing. Which brings us full circle to Roshaunda’s advocacy to incorporate black representation in 19th c literature, an approach mirrored in the core goal of the Design Studio she joined: to “reimagine a K-12 content map that acknowledges and celebrates diversity, and embraces the antidote of inclusion.”

The Design Studio was reDesign’s first rapid prototype of this ambitious undertaking, and was full of participants who, like Roshaunda, were chosen for their subject expertise and commitment to liberatory goals, but who brought along unexpected talents and perspectives as well. Their stories and reflections are profoundly heartening, generating excitement about the content maps they created and suggesting just how rich this radical new community-based design approach can be.

[2] For a brief summary of David Perkins’ work on learning that is both lifeworthy and lifeready, see the feature on “Understanding ‘high-leverage concepts’” in the NGLC MyWays report, Content Knowledge for the Life Students Will Lead (pp 10-11).