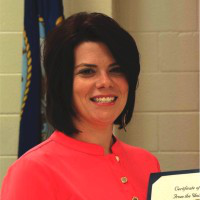 “My version of different was rewiring the whole system into something that was cross-disciplinary and had nothing to do with assigning grades or test.”

Casie Wise never doubted that she wanted to become a teacher. Simply put, when it came time to choose a career, she hardly considered anything else. Her unorthodox career as a teacher has since involved stints in multiple countries, teaching a wide variety of subjects. That diversity of experience now informs the approach that Casie takes to her work at her most recent site — an urban, alternative school in Memphis, Tennessee.

Casie recalled the difficulties of starting at this new school. From the first day, she felt a tinge of discomfort that went beyond the newness of a teaching environment. Many of her colleagues seemed to believe that teaching and curriculum should be static and conventional, which made her uneasy from the first day. Even as a new teacher, she saw that things needed to change. Yet when she approached administrators with ideas for addressing the problems she was seeing — for example, suggesting that skills like writing should be taught across content areas — she was told they were unrealistic. “It was just completely the opposite of any of the environments I’d ever taught in, any of the students I had taught. And with the mindset of other educators in the system, right away, I was extremely uncomfortable.”

Seeking to resolve this discomfort and push her colleagues in the right direction, Casie began pursuing a role in the school’s administration. From this new vantage point, she began to see gaps in the education system that went way beyond her individual school. The issues seemed bigger — she began to feel like there was an enormous gulf between the people who make decisions about curriculum and policy, and what actually goes on in the classroom. She said, “This de-professionalizes teachers. And on the other end, it also strips students of their own empowerment and their identities. And so within that classroom setting, teachers are being told what to teach when that really should come from who their students are and their communities.” Casie began to think that this fundamental disconnect couldn’t be solved with small tweaks and half-measures. Teachers should be reprofessionalized, paid well, and respected for the depth of knowledge they have about their students and their needs. In other words — the system needed to be flipped on its head.

empowering educators: From the Bottom-up

reDesign’s K-12 Content Map Design Studio was, in many ways, an attempt to do just that: reimagine the process of curriculum design as a bottom-up endeavor that empowers educators to meet their students where they are. The week-long event brought together teams of disciplinary experts, including educators, academics, activists, and industry professionals, to reimagine the K-12 Content Map for their disciplines so as to be concept-based, multicultural, and deeply relevant to students.

Casie’s passion for challenging norms in the classroom made her a natural fit for this kind of bold, imaginative work. She was used to making up for the deficiencies of pre-packaged curricula with her own materials, but this was a chance to push back on the status quo instead of simply working around it. In particular, Casie considered it an opportunity to reject the rigid compartmentalization of high school subjects that often led students to adopt a narrow view of what skills like reading and writing are useful for. She described to me the ways in which she had implementing a different approach to learning in her own work, saying “My version of different was rewiring the whole system into something that was cross-disciplinary and had nothing to do with assigning grades or test scores. It was this beautiful quilt of experiential learning through classes that didn’t have traditional subject areas but were built around life concepts and exposed kids to a global way of processing and approaching real issues.”

As she expected, one of the central focuses of the Design Studio was to push back on that compartmentalization, and instead lean into cross-disciplinary concepts. Although the Design Studio was structured around discipline-based teams (Casie joined the English Language Arts (ELA) team) participants were explicitly tasked with building content maps that used cross-disciplinary concepts.

For example, Casie recalled focusing most of her time on the concept of culture within ELA as a discipline — how culture was conveyed, taught, and treated in ELA. These questions offered opportunities for cross-pollination with other disciplinary teams that were also focusing on culture. For Casie and the ELA team, that “cross-pollination” happened with the Life Sciences team. A built-in feedback session during the Design Studio allowed the two teams to share their Content Maps and explore how both disciplines could be interwoven. Casie said, “In that moment, I felt we were truly representing a cross-disciplinary and equitable approach. I wish ALL educators could experience this.”

Beyond the work itself, Casie felt energized by the community she was immersed in at the Design Studio. Being in a racially, culturally, and professionally diverse environment of folks who shared her commitment to meaningful learning for ALL young people, was deeply nourishing. For someone who has often felt like an isolated revolutionary, the feeling of connectedness and solidarity that emerged from the Design Studio was powerful.

Casie also found herself with a renewed belief in the importance of going beyond the mere “celebration” of diverse cultures and identities. In a truly learner-centered environment, like the Design Studio, everyone is fundamentally reliant on each other to share their unique experiences, perspectives, and ideas. Casie described the shortcomings of stopping at celebration, saying “I think this goes beyond celebrating. It’s got to go into something more like elevating, sustaining.” She went further to explain the ways in which “celebration” falls short in the classroom, even when well-intentioned. Telling students that their cultures and identities are celebrated is not enough. “We have to elevate their cultures by allowing them to use it throughout the learning process.”

To Casie, the Design Studio felt like an inflection point. Reimagining learning to be truly meaningful and equitable is a long-term project, and progress is by no means inevitable. But a week full of collaboration, imagination, and reflection left her with a feeling of cautious optimism. After all, this was only the beginning. Participants in the Design Studio now belong to a broader movement within the field, and can depend on a cohort of revolutionary educators at their side as they carry this work forward into their own schools and to their own students. reDesign and their partners are pushing ahead as well, with their Designers-in-Residence program and a bold, hairy, audacious 5-year plan.